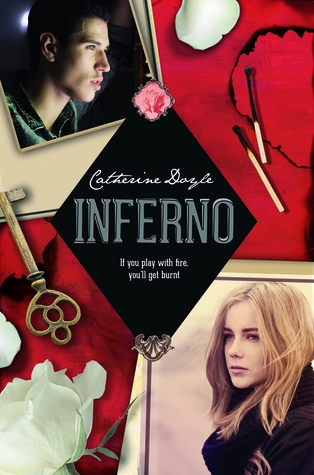 Romeo and Juliet meets The Godfather in the second installment of Catherine Doyle’s Blood for Blood series.

Sophie’s life has been turned upside-down, and she’s determined to set things right. But Nic, the Falcone brother who represents everything she’s trying to forget, won’t give up on their love – and it’s Luca’s knife she clutches for comfort. Soon another mafia clan spoils the fragile peace – and with her heart drawn in one direction and her blood in another, Sophie’s in deeper than ever.

“The whole point of being a good friend is being in the darkness. I’ll be your light, until you can be it yourself again.”

[Review will also be posted in my Goodreads]

I was expecting a lot from this book, especially at how the first one ended. I didn’t like the first book that much, since it mainly focused on the love story brewing between Sophie and Nic and I was craving more of the action scenes that came along with its Mafia theme. So I’m really happy to say that Inferno exceeded my expectations! There was snark, romance, and blood! A lot of blood and revenge spilled throughout the whole book, which lived up to its title!

For those who haven’t read Vendetta yet, it’s a sort-of Romeo and Juliet thing going on between the main female character, Sophie Gracewell, and a new mysterious guy named Nic Falcone. It revolves around a small Chicago suburb, where Sophie suddenly finds herself in a sticky situation with the Falcones. It’s cute, a bit cheesy, and your typical puppy-love crush that blooms into something more. Oh, and then add the Mafia into the mix.

Unlike with Vendetta, Inferno is so much better, and I’m so happy with everything that went on in Inferno I felt like my heart would burst from my chest.

Plot-wise, it was much better written and executed compared to the first. There were a lot of moments that just flowed smoothly and a few unexpected moments that kept me on the edge of my seat. I like how the plot’s problem expanded out, making it an even bigger issue, thus making the action even better. There were a lot of twists and turns that left me breathless and wanting for more. I also love how new characters were introduced, and the two warring Mafia families finally had a big role in the story’s plot. It would definitely not be a Mafia novel if there wasn’t any feud or blood war happening between two families. So that was a huge check for Inferno. Also, the importance of the two Mafia families were finally introduced, and how the story heavily revolved in it. It was more complex than what I expected, but it just added to the thrill of the book. The action was also so so so so so much better! All those shoot-outs, family feuds, and fire was probably too much for a Young Adult novel, but as someone who appreciates a very nicely written action scene and how fast-paced it was, I’m giving it two thumbs up!

I love the character development in the novel. It was definitely my most favorite thing about Inferno, especially Sophie, Nic, and Luca’s characters. Sophie reminded me so much of Clary Fairchild in The Mortal Instruments about how she won’t stop until she gets what she wants, even though people already keep telling her not to do it. She’s been both brave and stupid at the whole book, but it was actually better than her lovesick character when we first met her in Vendetta. She finally had a backbone to make decisions for herself and her loved ones, unlike during the beginning on how she heavily relied on others to make decisions for her. Nic, on the other hand, started out pretty strong in Vendetta. But slowly into the second book, we finally got to see the other side of him that made me cringe and hate him a bit. He reminded me so much of Tamlin of A Court of Thorns and Roses where he tried to protect Sophie in his own ways, even though those ways were a bit dark and twisted. I actually hated him during the latter parts of the book, but it made me think that Nic had a good reason why he was acting the way he was towards his family and Sophie.

Now for Luca Falcone. OH MY GOD. LUCA. He just left me so speechless. I already felt that he was going to be a big character in Vendetta, but just never realized how big until Inferno. There was something promising with his character at the latter part of the first book, and I was so happy that it was explored in the next one. There was so much more to him than just being the sarcastic and rigid underboss of the Falcone Family. I loved how another side of him was shown, but the side initially introduced never left. His character building was just so freaking amazing! He’s definitely my favorite character now, even more than Sophie! Of course, let’s not forget the blooming relationship between him and Sophie. It’s literally *heart eyes*

I admire Millie’s tenacity and dedication to Sophie. I wished I had a best friend like her that I can trust with everything, even the dangerous aspects of my life. Everyone needs and deserves a Millie. I wish we get to see more of her in the next book!

The plot twist at the end knocked my socks off! I was totally not expecting it at all!! I never even predicted that it would end like that! I usually can more or less predict a plot twist when reading something, but this one caught me off guard! So yes, this book has some really good plot twists! I won’t mention any of the plot twists, no matter how small or large they are, since I want to keep you guys all in suspense too!

Now I’m really expecting a lot more from the third and final book! I’m definitely going to devour the whole thing as soon as I start it!

"Women think they're strong when they're fighting other women, but when a man fights them, they know the truth.” - Grace & Fury, Tracy Banghart 📖
“If something keeps you human when pressure makes you feel like a volcano, hold onto that thing. by whatever means necessary.” - Take A Hint, Dani Brown, Talia Hibbert 📖
[BOOK TOUR + INTERNATIONAL GIVEAWAY]
"I am my own person. I don't just jump when asked and I won't neatly exist only where and how you or anyone else wants me to." - A Trial of Sorcerers, Elise Kova 📖
“For everyone who’s ever wondered if they were enough.” - Forest of Souls, Lori M. Lee 📖
"What you get out of being loved, it's supposed to be worth the compromise. When it's good, it makes you want to compromise." - Take a Hint, Dani Brown, Talia Hibbert 📖
✨MY THANK YOU GIVEAWAY ✨
"She thought there could be no future for someone like her until something bloomed in her heart - a phoenix." - Phoenix Heart, Sarah K. Wilson 📖
"A Fighter. A Survivor. Rebuilt Through Strength..." - Midnight Revenge, Kathryn Marie 📖