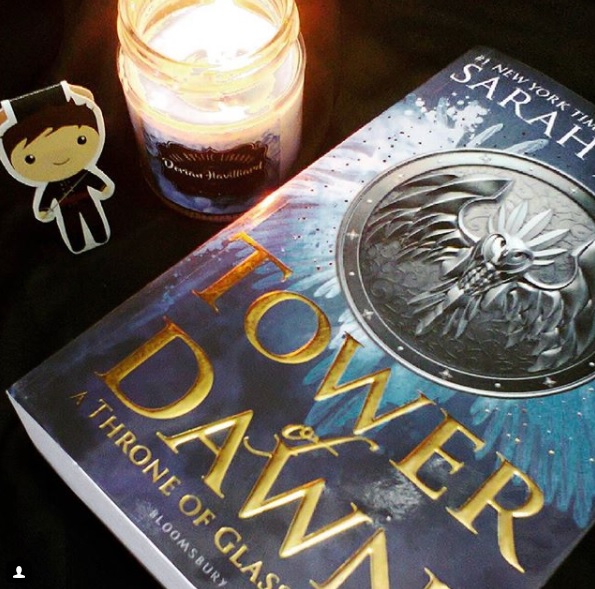 Chaol Westfall has always defined himself by his unwavering loyalty, his strength, and his position as the Captain of the Guard. But all of that has changed since the glass castle shattered, since his men were slaughtered, since the King of Adarlan spared him from a killing blow, but left his body broken.

His only shot at recovery lies with the legendary healers of the Torre Cesme in Antica—the stronghold of the southern continent’s mighty empire. And with war looming over Dorian and Aelin back home, their survival might lie with Chaol and Nesryn convincing its rulers to ally with them.

But what they discover in Antica will change them both—and be more vital to saving Erilea than they could have imagined.

If you haven’t read the Throne of Glass series, please don’t read this review because it contains a lot of spoilers. I highly suggest that you pick it up ASAP.

I had such low expectations for this book because I have never been a Chaol fan ever since the beginning. He was definitely one of my least liked characters in the series, so I wasn’t that excited as I usually am with the book. But oh boy was I proven wrong! It made me finally see Chaol in a different light that I never considered how much he had endured during those times in the past TOG books and how each of them affected him in a deep way. Now I’m bumping up Chaol up in that list.

I love love love love the new world that SJM introduced! The Southern Continent, the characters, the concept, the politics – everything! I loved each one of them so much because it was so different from what I was used to. Everything was different – from the characters, the way the khagante rules, the beasts, and the culture. UGHHHH I JUST LOVED EVERY PIECE OF IT SO MUCH! And don’t even get me started on my favorite characters, namely Yrene, Nesryn, Sartaq, and Hasar. They’re now my new babies!

I also loved how this book went from being a companion novel into an addition to the Throne of Glass series. We left off in Empire of Storms wrecked and devastated at the events that happened, but we had this huge gap in between Chaol and Nesryn leaving Rifthold to go to the Southern Continent and the battle in Skull’s Bay. I’m glad that Tower of Dawn was able to fill in that gap because it gave us a reprieve from the events of EoS and gave us more insight on the inner workings of a totally new world.

And this book finally gave us the answers were we looking for! It was the key to better understanding the whole history of the Valgs and Fae, and how Maeve is not just an evil side character! She’s the freaking reason why there are Valgs in the world in the first place! *throws rocks at her repeatedly until she dies* It just introduced a whole new twist into the already twisted storyline!

The final book needs to be the thickest in the whole series because of all that new information and details. It should give justice to all the heartache it had caused me for years.
But then again, hands down again to the Queen!

One thought on “Review: Tower of Dawn by Sarah J. Maas”

"Stay and watch the sun set with me." - The Sword of Kaigen, M.L. Wang ✨
"Trust is the thread that binds us... And the rope that hangs us." - The Mask of Mirrors, M.A. Carrick ✨
"Journey before destination, you bastard." - Rhythm of War, Brandon Sanderson ✨
"It is a beautiful mask, but all masks fall. In the end." - The Mask Falling, Samantha Shannon ✨
"You don't need to be gifted with a blade. You are your own best weapon.” - The Winner's Kiss, Marie Rutkoski ✨
"To be forgiven, one must be burned." - The Boy with Fire, Aparma Verma ✨
"The greater the desire, the greater the suffering, and now she desired greatness itself.” - She Who Became the Sun, Shelley Parker-Chan ✨
"Let the dream begin, let your darker side give in to the power of the music of the night." - The Phantom of the Opera, Andrew Lloyd Webber 🌹
"If you want a fate other than what Heaven gave you, you have to want that other fate. You have to struggle for it. Suffer for it.” - She Who Became the Sun, Shelley Parker-Chan ☀️