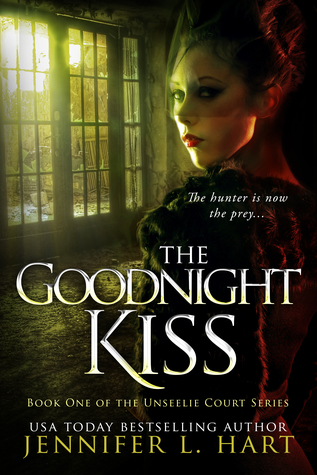 A teenage serial killer with a mysterious past.
The deadly hunter sworn to protect her.
Secrets, lies and a shot at redemption.
It all begins with a kiss.

When 16-year-old Nic Rutherford heads out for a night on the town, she brings a full arsenal. Her best weapon? A deadly kiss that can take down the biggest game around—humans. Two-legged predators don’t stand a chance once she makes lip to skin contact. But her blessing is also a curse, one that Nic fears will inadvertently harm anyone who gets too close—her aunts, her best friend, or the mysterious new boy who possesses strange abilities of his own.

Aiden Jager has the one thing Nic can’t resist—information. With his help Nic unearths answers about her own murky past along with the key to a hidden world where magic thrives and the impossible becomes reality if one is willing to pay the ultimate price. Beware, for once the door is open, there’s no turning back.

WARNING MATURE CONTENT: While this story is loosely based off the story of Sleeping Beauty, it is the dark folk tale version of the story. Themes include sex, rape, violence, vigilante justice and cold blooded murder. Explicit language is an added bonus.

The first thing that captured my interest in this book was that Jennifer L. Hart told me that I was going to love this one because it was a similar tone to ACOTAR. If you guys know me fully well, that alone would have made me read the book without even reading its blurb or asking what it would be about. But like the good reader that I am, I had to check out the synopsis of the book.

The Goodnight Kiss is the first book in The Unseelie Court series. The series title alone was more than enough for me to know that we would be dealing with the Fae and its 2 infamous courts. Our main character, Nic Rutherford is almost like your regular 16 year old teenager, living with her aunts who run a veterinary clinic and a best friend who likes to party. But she has a secret power – her kiss is deadly. Yes! Like Sleeping Beauty or Snow White’s Prince Charmings but with a totally reverse effect. Nic hunts down sexual predators and essentially bad people, luring them into her trap until she gives them her deadly kiss which she calls the Goodnight Kiss. So she’s basically like a vigilante-slash-grim reaper to the bad people in her area. She’s pretty independent and badass, so I loved Nic already at the beginning.

I loved how this book was a mix of urban fantasy and mythology at the same time. For the fantasy lover in me, I adored how we finally get to explore here the inner happenings in the Seelie and Unseelie Courts. Most books I have read that tackle on the Fae don’t usually delve much into this aspect of the stories (apart from Cassandra Clare’s Shadowhunter Chronicles) It is such a huge world that can give a lot of possibilities to a story to make it even better. So kudos to the author for giving us a new twist to the Fae courts and the world beyond it. Also, if you’re a huge mythology fan, this book is worth check out. I didn’t expect the Norse mythology to be mixed into it. That was actually why I couldn’t give it the full 5 stars rating, because I don’t know much about Norse mythology (aside from what I only know from Thor and Loki in the Marvel Universe). But I’m a bit glad that it came with a few stories here and there, so I wasn’t completely confused most of the time.

If you’re looking for romance in this book, you wouldn’t be disappointed. The relationship between Nic and Aiden is very thrilling yet complicated. I’m actually surprised that this book is YA, and not New Adult because of the romantic scenes, aside from the violence, social issues, and trigger points that surrounded the whole book. This is not an insta-love story, which I love, especially at how young Nic was in the book, and I just hated the whole idea of teenagers quickly falling in love.

Also, the diversity in this book is epic! This is my first time to encounter an asexual character in a book, and I enjoyed viewing it from Nic’s perspective a lot. While I’m very much open to all sexual identities in books, this pretty much took me by surprise – in a good way. We get to watch Nic try to solve the mysteries of her attraction to Aiden because she never felt anything like sexual attraction before. And Nic isn’t the only LGBTQ character in the book.

Judging from what I’ve read so far, I did enjoy the book a lot, though there were only a few hints of ACOTAR in it. But even without it, I would have enjoyed reading it. I can’t wait to read the next book, especially with that small cliffhanger at the end.

Born and bred in Upstate New York, USA Today bestselling author Jennifer L. Hart now lives in North Carolina with her three Hart men, two spoiled canines and a host of imaginary friends. She is the author of several romances and mystery series including The Misadventures of the Laundry Hag and Mackenzie & Mackenzie P.I. THE GOODNIGHT KISS is her first Y.A. /N.A. novel.