Title: Between the Sea and Stars (The Lena Series #1)

A Legend,
A Magical Shell
A Girl Who Dreamed Of Something More…

Lena, a Merrow girl, lives in the Skagerrak sea with her father, Carrick and her brother, Javelin who tells her of the legend of the Merrow Queen murdered by her human lover when greed takes over. But what’s worth spilling the queen’s blood? Gifted from Poseidon, himself, a magic shell gives any human the ability to control both land and sea.

When Javelin is called to join a clan of Merrow soldiers bent on protecting their waters from human invasion, Lena resists Merrow law and ventures to the shore with no choice but to swim to land.

With newfound legs, Lena is whisked away on a new adventure with new friends and new trouble. Everyone seems to want something from her as intrigue lurks around every corner.

Trying her best to hide who she is and remain safe from the dangers of the human world, will Lena finally find where she belongs, or will she be swept into a strong and stormy current by lust, greed, and jealousy.

When I first read about Between the Sea and Stars, my attention immediately locked into the worlds “The Little Mermaid.” The Little Mermaid has always been one of my favorite Disney princesses, and I just happened to finish To Kill a Kingdom which made me do a mermaid-theme reading session. And I was so glad that this book did not disappoint!

As a fairy tale retelling, there were obviously parts throughout the whole book where it was a bit similar to the original story, but I loved how Chantal Gadoury made it her own. In this book we follow Lena, who is a merrow, that longs and is really curious about the world beyond the seas. When she suddenly finds herself in awful circumstances, she is forced to flee from the ocean to escape the wrath of Poseidon and the Sea King, and that’s where she becomes human.

I give two huge thumbs up to the author because of her almost lyrical writing style, and the incorporation of Danish terms. It definitely suited the mood and pace of the book. Everything was just so vividly and beautifully written without being too overwhelming, and I could clearly picture everything in my head easily. The story just flowed effortlessly, and I couldn’t stop reading it, wanting to know more as it progressed. As for the plot, it had a steady rise and fall. The events that happened while Lena was both in the sea and land was equally spectacular, and how those events merged together to make an even more complicated scenario for our characters. This book also tackled a number of ideas that aren’t really seen in most YA books, such as greed, lust, and jealously. These themes just made the book even more interesting to read and have the characters a more rounded personality.

I also adored the diversity of personalities and values in all the characters. I especially loved how Lena was written as a strong-willed dreamer, but she was a runner. She would always run in the opposite direction instead of fighting because she wanted to get both herself and her family safe. I haven’t encountered this type of heroines lately, so Lena was a breath of fresh air for me. As for Jace, I always felt that there was something fishy about him! Upon his first appearance in the book, I felt that he might not be the Lena’s “Prince Charming.” Both Edwin and Soren were also my favorite characters, because they were unique and quirky in their own ways, and it drew me to them.

If you’re a fan of either mermaids, fantasy, fairy-tale retellings, or a mixture of all, then this book is definitely for you! Between the Sea and Stars comes out on June 19, so better get your copy! 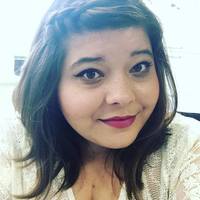 Amazon Best Selling Author, Chantal Gadoury, is a 2011 graduate from Susquehanna University with a Bachelor’s Degree in Creative Writing. Since graduation, she has published “The Songs in Our Hearts” with 48Fourteen Publishing, and “Allerleirauh” with Parliament House Press, with future titles to follow. Chantal first started writing stories at the age of seven and continues with that love of writing today. Writing novels for Chantal has become a life-long dream come true! When she’s not writing, she enjoys painting, drinking lots of DD Iced Coffee, and watching Disney classics. Chantal lives in Muncy, Pennsylvania with her Mom, Sister and furry-‘brother’ (aka, puppy) Taran.

3 thoughts on “ARC Review: Between the Sea and Stars by Chantal Gadoury”

"Things don’t have to stay as what they started out as." - Legends & Lattes, Travis Baldree 📚
"Be selfish," he whispered. "Be brave." - Babel, R.F. Kuang ☕️
"The dream-eater is a ghost animal. If you have nightmares, you can call it three times to eat the bad dreams. But you have to be careful. If you call it too often it will also gobble up your hopes and ambitions.” - The Night Tiger, Yangsze Choo 📚
"We don’t repeat moments in time, but we come back around, echoing them." - The Bone Shard Emperor, Andrea Stewart 📚
"We were like gods at the dawning of the world, and our joy was so bright we could see nothing else but the other." - The Song of Achilles, Madeline Miller 📚
“You’re meant to be helping people.” - The Lost Metal, Brandon Sanderson 📚
I have been having a hard time encountering 5 star reads lately, so I'm hoping I will come across them soon before the year ends ❤️
“I’m only a humble jade setter, but I’m content with the last thing I was able to fix.” - The Jade Setter of Janloon, Fonda Lee 📚
"Only the very weak-minded refuse to be influenced by literature and poetry." - Clockwork Angel, Cassandra Clare 📚